Find exactly what you need.

Its quick and easy.

Are your Spray Gun Cleaning practices: 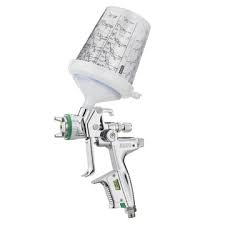 • End of the Century

A poorly cleaned spray gun produces poor results. It must be clean, particularly with today’s products. Materials have become higher in solids content, waterborne based, and faster curing formulations that require better tools to clean spray guns. Then why do we continue to use practices used from the beginning of the creation of spray guns? Design and development of spray guns, as well as material formulations, have evolved along with customer quality expectations. The demand for better techniques and tools. In this article, we will cover the history of spray gun cleaning and the various practices used throughout various industries, and where cleaning has evolved to get to the Next Level of:

We call it the history of spray gun cleaning, yet many operations still follow this same practice that was used with the discovery of the spray gun, in the early 1900’s. The Manual method was and in some cases still is a fairly simple process of manually dipping a spray gun in a bucket full of solvent, sometimes leaving it to soak for extended periods of time, and the use of a toothbrush or bottlebrush may have been employed to remove residues. The simple process was reasonably effective with the sprayed materials and the subsequent quality of the job was accepted as the best that could be done. Now remember this was purely a manual process and let’s face it, labor, spray guns and solvents were cheap.

During this time the worker’s exposure to hazardous solvents was not a big concern, as well the environmental issues were nonexistent. For many years all of this was acceptable in the Historic Period of spray gun cleaning.

Manual cleaning evolved from the bucket because some processes new materials required a spray gun to be cleaned better in order to improve the quality of the finish. We would like to call it evolving from the bucket to the drum and the toothbrush to brushes and picks the design for the application. This drive to have the spray gun clean demanded the use of a more clean solvent, making a 55 Gallon drum the ideal choice for a cleaning system. Now, remember, this is a period when the cost of labor and materials was cheap and quality was sacrificed for productivity. More people were demanding products than the industry could produce. This was the primary method for years until the first big change was made….Automatic Spray gun Cleaners. 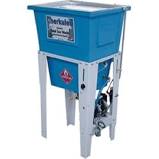 Only taking about 40 years, in the early 1970’s a new tool was introduced to spray gun cleaning, it was the Automatic Spray Gun Cleaner. The idea of having a machine that was like a dishwasher for spray guns that would free up an operator’s time to be more productive and meet growing environmental concerns …what a great idea!

The intent was right and it did improve productivity, but not to the extent hoped. Cleaning a spray gun in a process where recirculation of dirty solvents after earlier cleanings, relegated these systems to be rinse machines. These machines were the final process after a manual cleaning over a 55 Gallon drum of solvent. Again, an advance in spray gun cleaning, but the main process was manual. Many environmental agencies praised and recommended these units as a significant answer to fugitive VOC’s (Volatile Organic Compounds) sent to the environment from spray gun cleaning processes. Unfortunately, they were not aware that these systems did not clean a spray gun to the satisfaction of the operators and required additional manual operations utilizing open 55 Gallon drums. 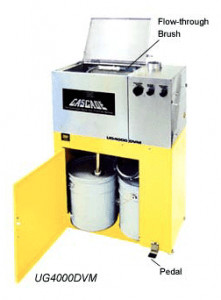 The big leap in improving the Automatic Spray Gun Cleaner took place in the 1990’s with the addition of Used and Clean solvent control and Workstations that included larger working areas and multiple cleaning capabilities. These were significant improvements in spray gun cleaning and productivity. Automatic spray gun cleaning equipment now had an effective way to “Clean” with “Used Solvent” and “Rinse” with “Clean Solvent”. The result was superior cleaning of the spray guns and improved solvent utilization. The addition of Workstations provided the best capability since it includes automatic, manual and spray out features. These systems give operations and their operators all the existing cleaning capabilities in one large workstation area. This was a huge advancement in the cleaning of spray guns.

Although these were big leaps in spray gun cleaning, the automatic portion of cleaners still had one weakness that discouraged most spray gun manufacturers, the exposure of air passageways to the residues during the cleaning process. These residues then would disrupt the air liquid atomization of the spray gun and be expelled from the spray gun during the spray application process. The result was a flawed finish requiring secondary processes. That is until now… 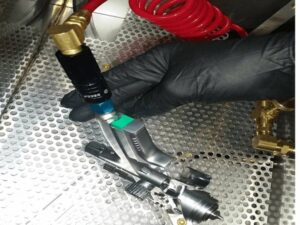 The new century, 2000’s, bring us a new age in spray gun cleaning, “Pressurized Automatic”. The addition of this revolutionary concept to an Automatic Spray Gun Cleaner takes this type of cleaner to the Next Level. Many of the spray gun manufacturers have not been supportive of Automatic Spray Gun Cleaners because of their poor performance in cleaning. One of the key areas was the exposure of the air passageways to solvent and residues.

Pressurized Automatic addresses spray gun manufacturers concerns with a simple concept. Compressed air is supplied to the air passageways to protect and keep them clear of residues during the cleaning process. In addition, the compressed air meets with the solvent at the spray gun tip creating a total cleaning of this difficult area. The result is a level of cleaning never achieved before.

Let’s face it each of these questions is on the minds of anyone who sprays materials with a spray gun. So what does the future hold for your operation? We will try to give you a glimpse at the future and show you that in some operations the future is here now. It is really only a matter of time before everyone will be using some form of Alternative Solvents.

Alternative Solvents are solvents that are derived from various mixtures of materials that produce a low to in some cases zero VOCs (Volatile Organic Compounds) and HAPs (Hazardous Airborne Pollutants). Some of these Alternative Solvents have been reviewed and approved by the EPA as environmentally friendly.

Di-Ionized water has become the choice of most to clean-up equipment utilizing Waterborne Coatings.

The next question is their Automatic Gun Cleaners available that can utilize these Alternative Solvents or Di-Ionized water? The good news is there are several systems available, but special attention needs to be made to make sure the gun cleaner system and the sprayed material is compatible with the Alternative Cleaning Solvent. Some require filtration systems for reuse of the solvent and others can utilize distillation for purification of the dirty solvent. Each can be very successful, but only if careful consideration is made in the selection process.

Which Spray Gun Cleaner System is your Operation Using!

Where is your operation in the evolution of Spray Gun Cleaning? Are you:

Your Labor and Material costs are rising, your quality must be flawless the first time every time, and profits are being squeezed. Here is an area that is typically ignored for significant improvement. Don’t make the same mistake this year; review your spray gun cleaning equipment and practices. Take advantage of today’s technology by making an investment into the Next Level in spray gun cleaning and see how it will improve the success of your operation.

Barry Thomas has served in design, sales, management and consulting capacities of finishing systems for 17 years. His career began with Painting Operations at GM and later become Director of Engineering and manufacturing for DeVilbiss Spray Booth Products. Throughout the years, he has been associated with almost every aspect of finishing in the automotive refinish and industrial markets. He is President of BECCA Inc., a leader in environmental equipment solutions for finishing operations. Products focus on spray gun cleaning and solvent recycling. He currently serves as a committee member on the NFPA 33 & 34 Technical Committee on Spray Finishing and UL2208 Standard Technical Committee on Distillation Units.

This site uses Akismet to reduce spam. Learn how your comment data is processed.